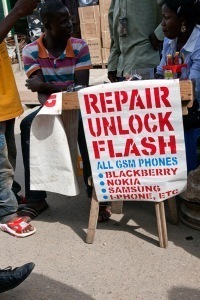 My last post http://asemota.posterous.com/failure-to-scale took me down memory lane a bit. I remember a lot of attempts we made to diversify our client base, some were successful for a while and others were embarrassing failures. With hindsight we actually saw certain trends coming but took the wrong measures to address them. The most embarrassing instance for me was when we just came to Lagos in 2000 and had no office.  We were operating from my uncle’s house in Ikoyi at the time and I made the mistake of giving the house number to a client (there were no GSM cell phones in Nigeria by 2000) who called and got the cook.

I remember a good friend and MBA classmate from UNIBEN telling me that our business model was flawed because we had only one client. He said “you only have one source of income and it is not regular”. He was right because our cash cycle was tied to the palm nut harvest cycle as our client’s main product was oil palm. We also had the added risk of processing payroll monthly for thousands of angry plantation workers with dangerous implements. Anytime there was a software or hardware issue we had a life and death situation on our hands as riots often occurred for the flimsiest excuses. We learned from that site how to provide 99.999% hardware availability and almost zero software downtime partly because it was our only source of income and partly because we were afraid for our lives.

We recognized this fundamental problem with the business model and we thought the best option was to diversify. We created a bespoke 3rd party software implementation and training business for Microsoft products, a hardware business and a website development company. Remember the Y2K bug and the fear drummed into people in the last part of the 90’s? We capitalized on all that but all we really had, was an opportunistic business model based on hype which was not sustainable. This was the very reason why reality hit us in 2000 when like the rest of the world; the corporates in Africa also realized that Y2K was a big excuse to sell new stuff. We somehow managed to have all these three new business units being run very profitably for a while as we moved from “the BQ” into our own offices in a prestigious and upscale part of GRA in Benin. We moved from there to Awolowo Road in Ikoyi which was a high street location in Lagos as we felt location was important for business. Maybe it was then but now it is totally irrelevant now that the Internet and cell phones have fundamentally changed the way we do business.

The first casualty was the hardware sales business was which was killed by Otigba computer village traders and their adverts in the dailies. Competition was fierce and they had to reach the customer directly and cut out middlemen. We were basically the middlemen as most entrepreneurs in the Nigerian technology business were. A seller’s market quickly became a buyer’s market because the information was readily available to end users and corporates via the newspapers. You could hardly justify your margins with service and it became clear that we either had to become traders, own our hardware brands or leave the business. We left.

I still think not much has changed with the hardware market in Nigeria as it is all ruled by Otigba the Lagos computer village coined Nigeria’s “Best Buy” by Sarah Lacy in one of her articles on Nigeria http://techcrunch.com/2011/05/06/strolling-through-nigerias-best-buy-a-photo-essay/

The adverts no longer have prices on them but the middlemen still exist. I had a very interesting conversation recently about Otigba and the future of the retail hardware business in Nigeria with my friend Chinedu Oguegbu the founder of www.smartbuy.com.ng. Chinedu is one of the most dynamic young men in the Nigerian tech space doing great things without great fuss. This guy is a Harvard trained Otigba trader with a world class portal providing service that Best Buy or Amazon would envy in a difficult terrain like Nigeria. I wish Sarah Lacy had met him too.

Smartbuy still does good business by cash on delivery “in spite of” our payment and trust constraints. It seemed to me that he had solved the logistics riddle and Smartbuy could easily evolve to “Smart Delivery” for all other merchants.  Our discussion was centered on how he can scale his model and disrupt the traditional commodity style of hardware distribution in favor of getting directly to the base. This commodity model exists because the distribution model predominant in Nigeria is the Ibo trader’s value chain. That value chain exists in Alaba, Otigba and all markets. The commodities may change but the players and the model remain the same. Jason Njoku used the Internet to bring Nollywood to the world with a disruptive new model for content distribution; Chinedu wants to also do the same for Otigba but this is harder as you cannot “stream laptops” over the Internet.

The Internet is changing the hardware game again just the same way newspapers changed the game last decade. He does business already all over Nigeria and opened offices in Abuja and Port Harcourt. From the discussion it became apparent that that payment is one part of the equation, sustaining good service and meeting the needs of the customers you really don’t know is the biggest challenge. Data is the game changer when it comes to scaling this type of business in Nigeria, it is not just payments. Data to the merchant and information to the customer is what will separate the winners from the losers. You need to be able to have demographic information, purchase preference and a whole lot of stuff which the cell phone companies may have at their disposal but are either not aware of or legally cannot provide. You can advertise but how do you know who to target? How exactly do you create a market from a jungle?? We know there are 150 Million+ people but the model for hardware sales has been “pull” and Chinedu wants to change that to “Push”.

He is a rare breed of Nigerian entrepreneur as he prefers to discuss and share ideas openly rather than let them die in stealth. He understands the market and he understands collaboration and the power of many. He even provides sub-domains on Smartbuy for others to showcase their products. He realizes that he is building a platform instead of a closed business and he knows the benefits that will come from being the arena where the battles are fought rather than be a gladiator. He has solved the logistics riddle, he is also adding Smartfix, a repair service similar to Geek Squad in Best Buy to his portfolio and that has made me believe that he really gets it.  I asked Saheed Adepoju the founder of one of the new Nigerian tablets recently why his products were not yet sold at Otigba or Smartbuy?

The market is at Otigba and not at Silverbird or Genesis, Smartbuy is succeeding where giants like Kalahari have failed. If he succeeds in fully solving the riddle in Nigeria, Smartbuy may be the next big thing in Africa and Chinedu is ready to scale.