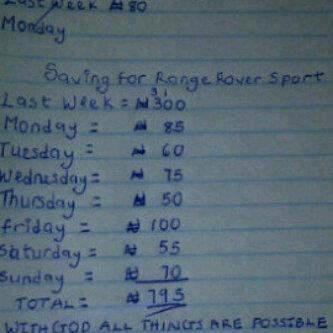 The image above is a picture taken of a Nigerian gate man/security guard's notes (let us call just him Koko) showing his savings with the target to buy Range Rover Sports SUV. It has been circulating in social media and some people found this funny but I didn’t.

I saw two things from this:

1. Koko is a very ambitious and religious person with a lot of determination but saving for the wrong asset and the wrong reasons. He needs proper financial advice.

2. He is unbanked and saving all the cash he makes from petty trading probably in his mattress.

It appears Koko is also a small time trader (as most of them are) and he does that to augment his meager income and to make daily savings. That means also that he is a small time "Merchant" with neighborhood customers he is familiar with.

Sandy is my domestic cook/caretaker in Accra and I made her open an account with Ecobank a couple of years ago to make my life easier. Now she is thankful that she has some real savings and is so thrilled that she can get proper statements from ECOBANK.

Many years ago, I had a high street office at Ikoyi in Lagos and went out for lunch at a fast food restaurant down the road. That afternoon I met the famous artist and painter Sam Ovraiti. I am a huge fan of African art and had a few of his famous watercolors so it was an honor to meet him so many years after.

He had a new business selling books, he was his own publisher, printer and salesman selling books from office to office all around Lagos. I asked him if business was good and he answered that it was phenomenal. I offered to buy him lunch and in return he offered me some free financial advice he learned from his books. One of the books he was selling was “The Richest Man in Babylon” by George S Clason

First, he said I should stop buying people free lunch because it was a habit guaranteed to make me poor. If I had to buy lunch, I had better make sure I get something in return and out of the kindness of his heart he will tell me a story to learn from. Next he asked me if I had any savings at all after I had finished paying for my fancy high street office? I tried to explain why we needed to have that office close to a major client and also because of the prestige it would bring. He asked me how much I saved daily? I told him I don’t save daily and he told me I was a foolish man. He said that he too used to be a foolish man until he had an experience that changed him after he turned 40.

He told me that he used to have a car that was more of a headache and burden than an asset. He struggled to keep it on the road as he tried to use it to move his paintings around to sell them. He could not afford new tires and constantly had to patch up his old worn out tires almost daily. Morufu the neighborhood vulcanizer always helped him to do this but he noticed that strangely the guy was never available for at least an hour at 10 am everyday.

One day he asked him where he always went to at that time and Morufu told him that his previous "master" who taught him all he knew also taught him to always save whatever he made for the first two hours everyday and never touch it. He always left promptly at 10 am to do just that. He took the money home.

Sam realized quickly that Morufu probably had a higher net worth than himself with all his education and fame. He also realized too that the car was no longer an asset because it did not bring him money in the first 2 hours of everyday but rather cost him money instead. Most of that money went to Morufu and his mattress.

He gave up his car, tried Morufu's approach and made sure he was doing something that could make him money the first two hours of the day so he could save the money. It worked for him so well that he reinvested the money he saved and built a new business. He is now a rich man and no longer a struggling artist.

Koko, Sandy and Morufu are the REAL unbanked and the people who should be the target of financial inclusion initiatives. They are at the bottom of the pyramid with dreams of being at the top someday. They have goals, they have dreams and they are the ones who really keep our African economies working.

One common thing with all these people including Sam is that the real need they have for a bank is to save and not all the fancy bells and whistles like Internet banking, SMS alerts or "Bill Payments". Those things are nice to have but the primary need is just to keep money safe somewhere until they need it. They can never get loans from banks and wont even bother to ask for them. Their source of finance is the support system they have built and revolving cooperative credit savings schemes like “Esusu” etc.

Some of the unbanked are entrepreneurial and others are not but the reason they save is that they want a better life than the one they currently have. That is where they can also do with some sound financial advice similar to what I got from Sam Ovraiti and from reading the book "The Richest Man in Babylon". That role is supposed to be played by Micro Finance Banks but those too have abandoned the “Finance” function in their names and also become “Merchants of Cash”.

Corruption and 419-fraud are slowly corrupting this base of the pyramid. Aspirations and ambitions like those of Koko are mainly because of what he sees around him as signs of affluence. He will not know that the cars he sees may be leased or that the owners are running away from the law or have defrauded banks or pension funds. He will also not know that it costs a fortune to keep them on the road yearly, all he sees is that there are people better than him and he will want to be like them either through doing what they do or saving to get what they have.

Honest aspirations and ambition are very important elements in the growth of economies and the more truly successful people we have as role models the better the society will be for it. Sadly honest successful people are becoming an endangered species in African countries like Nigeria. A businessman who approaches a bank for a loan to finance his business will quickly find that he also is truly “unbanked”.

Banks by nature are supposed to finance business but instead have become solely “merchants of cash” making commissions on cash turnover, risk assets and short term treasury investments instead of credit. If he does not get the full service from a bank and he is only charged for moving money in and out of banks, he is not just “under-banked”, he is worse off than the “unbanked”.

I gave up my high street office and started saving like the unbanked because I wont delude myself. 99% of us are unbanked in Africa and the 1% is other banks, government and fraudsters.