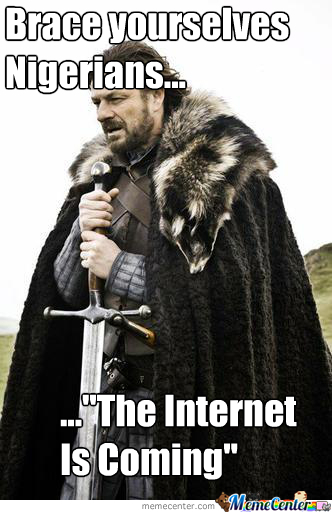 “Lewis Rothschild: You have a deeper love of this country than any man I've ever known. And I want to know what it says to you that in the past seven weeks, 59% of Americans have begun to question your patriotism.

President Andrew Shepherd: Look, if the people want to listen to-...

Lewis Rothschild: They don't have a choice! Bob Rumson is the only one doing the talking! People want leadership, Mr. President, and in the absence of genuine leadership, they'll listen to anyone who steps up to the microphone. They want leadership. They're so thirsty for it they'll crawl through the desert toward a mirage, and when they discover there's no water, they'll drink the sand.

– From the movie “The American President” (1995), starring Michael Douglas.

The Signal And The Link Bait

I have had many interesting posts lined up in my head after my last visit to San Francisco for Google I/O 2013 but Twitter keeps getting in the way. Lately, I keep get into a lot of interesting conversations on Twitter about the Nigerian tech startup scene and it keeps affirming my belief that the narrative around entrepreneurship and technology innovation in Africa and especially Nigeria needs to change.

Recently, I had to publicly let my feelings known to Bankole Oluwafemi on the fact that only a few stories about a few individuals keep getting repeated over and over again while other interesting and relevant ones never get mentioned. One would think that the only game in town were the three horsemen of Jumia, Konga and Iroko. Those are respected startups doing great stuff but they do not represent the entire ecosystem or even begin to paint a full picture of what is going on beneath the surface in Nigeria.

I was in Nigeria recently and found out firsthand that a lot more is happening than the few stories being flogged to death online and in the media. There are a lot more founders who are doing even bigger things but are not as controversial or press savvy as the few whose stories get repeated over and over again. These new founders with new enterprises (whose stories are not being told enough) I believe are the right role models we should be putting forward for the younger generation to emulate.

I decided to meet with local tech startup founders informally for drinks at FourPoints Sheraton in Lagos instead of the crowded and well-attended Mobile Web West Africa event. I met them at a forum where they could talk freely about their ventures and challenges without the constraints of time and space. Some of those people I met included Gossy Ukanwoke of Beni American University who has just raised $25m in funding locally to build a private university as the next iteration of his online version. Another was Editi Effiong of Anakle who is doing something different and interesting n the digital advertising and content space. Femi Taiwo who a lot of people do not know was responsible for building the platform that ran the last Nigerian general elections, Oo Nwoye himself also showed up as well as Mark Essien of Hotels.ng and Lanre of Drinks.com.ng both now part of the SPARK.ng fold.

By the way, I really love what SPARK is doing and the spirit is great, but I also believe very much in Tuco’s philosophy in “The Good, The Bad And The Ugly”, “…if you want to shoot, shoot don’t talk”. SPARK is a bold (middle-finger-up-in-the-air) challenge to the ecosystem and the community. I will be happier if there are more ventures like SPARK rather than people trying to bring them down or speculate what is going on in there. For a group they are pretty much transparent and people can just ask, they should not depend on “stories”. There should be conversations not speculations.

“The Internet Is Coming”

I wrote a tweet after my visit to Nigeria that felt more bullish about the startup scene than I have been in the past as I have seen real progress being made. There has been a lot more that has happened since Oo Nwoye sent me a mail introducing a group with a funny name calling itself “NigIntEnt” or “Nigerian Internet Entrepreneurs” (later rebranded as TechCircle) and a lot more that has happened since the first Demo Day he organized two years ago that was covered by TechCrunch. Introductions were made that day that changed the Nigerian startup scene forever.

Two years is a very long period in “Internet time” but is a short period in Nigerian time considering the obstacles those founders of companies which ordinarily would have stood no chance have had to overcome. Earlier last decade, I was very hopeful when a similar movement was started by the likes of Wale Tinubu, Jite Okoloko, Bolaji Balogun and the late Osaze Osifo. Before them, my uncle Henry Imasekha and cousin Hakeem Bello Osagie had staged the biggest coup in Nigeria with the take over of UBA and things changed forever. Banking, telecommunications, oil and gas have never remained the same. Raising $285m locally to get a license for an unproven startup was the pinnacle of it all. I was not only lucky to have witnessed it but part of making that magic happen. I believe the magic can be repeated over and over again but it seems that somehow we have stopped thinking big.

The power had continued to shift to younger and younger generations at an increasing rate until suddenly things slowed down again as the new guard also became the old guard. They became defensive of their new fortunes rather than inspire a new generation who would even do better and change things forever. I read an article recently where someone described Lagos this way:

“Lagos looked to me like a city where aliens had come and built the city and then left, and then just sort of let it decay.”

That observation is very apt as it explains what happened after the growth in the 80s. A few people made a lot of money then took it out without reinvesting it, leaving the infrastructure to decay while they still keep skimming off profits. The money that is being made in Lagos or indeed Nigeria is mind blowing but just think of how much more could be made if things could work a lot better? That is where thinking big comes in.

The state of entrepreneurship (or rather “opportunism”) in Nigeria seems to be a “zero-sum-game” and a “winner-takes-it-all” mentality is pervasive. For every great idea, there are 100 other competitors eager and willing to take you down so people allow barriers to be in place so that others cannot challenge them rather than remove them so that they can scale to an even greater magnitude. I always hear that Nigeria is unique and Nigerian problems are different from others elsewhere and I agree but I also believe that they are because Nigerians continue to make it that way. Things remain the way they are not because people are thirsty in the desert and they drink sand, it is because they do not know the difference between sand and water. They will continue to drink sand when they see water beside it; it has become second nature.

I have seen great products from Nigeria die because they were over-customized to meet local constraints therefore creating a barrier for them to scale effectively beyond Nigeria.  What happened to thinking local and acting global? Thinking about the Nigerian market alone is where great companies go to die. I know because I killed one myself then resurrected it by thinking beyond Nigeria. Thinking big is not only about geography; it could also be about market. I do not see any reason why I would go into a crowded pool reddened with the blood of those that have been slain when there are blue oceans to explore.

I wrote a tweet recently that "it is not a crime to try to kill your competition by outmaneuvering them, what is a great crime is not doing it with new ideas". The difference between success and failure in Nigeria is not always about efficient execution but more of anti-competitive practices and artificial barriers. We love trying to play mogul and attempt to build monopolies but the truth is that monopolies are usually limited by geography and scarcely scale. Even Dangote our biggest monopolist has seen the value of scaling beyond Nigeria.

The good news to borrow an analogy from the George RR Martin’s bestselling books now a famous TV series “The Game of Thrones” - “The Internet Is Coming”. The Internet removes barriers to access not just for content and data; it also empowers those who build on it to solve real problems with applications that can scale very rapidly. I agree that the Internet cannot solve all problems in Nigeria or even Africa, the beauty of it is that it makes knowledge distributed and people can learn how to solve their own local problems by seeing how others have solved it elsewhere. The winners in the long term are those who provide platforms that allow this to happen rather than barriers that prevent it. The Internet opens up many blue oceans and is the monopolist's greatest nightmare.

Nigerian founders have to start making big bets on the Internet, as it is the great leveler. The cost of getting an Internet startup off the ground has continued to shrink and is still shrinking. Not every idea has to do with disrupting incumbents or replacing brick and mortar processes. I was appalled to discover that with online advertising in Nigeria, the problem is not with inventory of ads but where to place them. Advertisers are getting tired of the same usual suspects. Not every idea also should be content or e-commerce related, a lot of thinking out of the box is required. Don Tapscott the author of “Wikinomics” mentioned that the scarcest and most finite commodity in the world is human attention. 170 Million units of human attention can build great fortunes.

The Sword Without A Hilt

Doing business in Nigeria in the short term however remains a real challenge. The obstacles are real and the problems daunting. There is a conversation also from The Game Of Thrones that describes it very accurately:

“We free folk know things you kneelers have forgotten. Sometimes the short road is not the safest, Jon Snow. The Horned Lord once said that sorcery is a sword without a hilt. There is no safe way to grasp it”.- Dalla, to Jon Snow

I believe the few successes currently being witnessed in Nigeria are short-term successes requiring tremendous effort. Getting results when everything conspires against your success is very much like sorcery; the fundamental truth is that things cannot continue to remain that way forever. Successes will bring attention and attention will bring further investment. Just like sorcery in the middle ages was replaced by renaissance, things will definitely change in Nigeria. It was human creativity and enterprise that made the renaissance happen and reduced the secrets of druids, sorcerers and alchemists to science.

Patriarchs like the Medicis of Florence bankrolled the renaissance and I believe more of those type of people will emerge to fund the Nigerian renaissance as they see beyond “The Great Wall” that “The Internet Is Coming”.

For now, we are like “The Men Of The Night’s Watch” and also like Jon Snow “we know nothin', nothin' at all”.