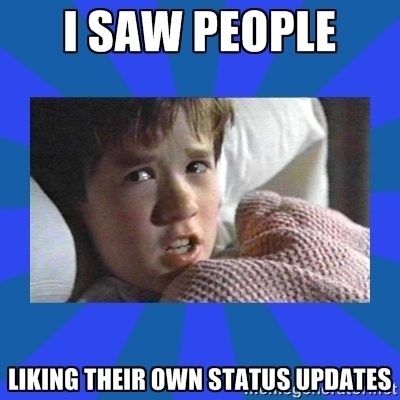 My wife hates social media. She may have Facebook, Twitter and Google+ accounts but she hardly uses them and does not engage there as much as I do. She keeps taunting me about my interactions with “imaginary friends” and “imaginary followers”. The only reason she goes on Facebook at all is probably to see me clown around. I try to prove her wrong and defend myself but really, how many of my 800+ Facebook friends have I met in person? How many of the cumulative 2000+ Twitter and Google followers have I had real life interactions with in the physical world?

If I am honest, less than 10% of those connections are actual relationships where we know enough about each other enough to interact in a meaningful way. Social media has a lot of positives as it allows us to indirectly hear and relate with more diverse opinions and viewpoints but it also has a lot of negatives. The negatives probably outweigh the positive benefits.It allows for healthy debate but also can be used for personal and corporate spin. A recent article (sent to me by my wife) is damning of a majority of social media posts especially Facebook and their motives.

As the Westgate attack in Nairobi was in progress, I never thought to call my cousin or friends living in Nairobi to find out if they were OK and even if they weren't I could not have done much on the plane from London to Accra. I only waited to see them post something on social media to confirm proof of life. Social media has gradually replaced actual connections with people we know.

Yesterday I saw a sad post here on Medium titled “A friend died nearly 2 years ago. I had no idea”. The title is self explanatory.

I remember the time I was actively pushing for information technology security in Nigeria early in the last decade. We set up a local chapter of the Information Systems Security Association (ISSA) and I was the communications officer. We met physically monthly at various locations in Lagos and it was at one of those meetings that I complained to Emeka Okoye about my headache searching for an office space near my client MTN in Lagos.

Emeka introduced me to a gentleman who allowed us to share and get our first proper office. He probably would not have taken me seriously or known the extent of my pain if we had not met physically at those meetings. I am sure there were many other problems that were solved professionally by complete strangers at those events. Sadly the physical meet-ups started giving way to texts and e-mails and finally it all stopped. Social Media killed the Social Meetup. I was very happy when the Nigeria tech community decided recently that it was best to have actual meetings instead of having “beer parlour” type discussions in social media.

One other sad story from Nairobi, which ironically I also found out from social media, was the death of Idd Salim a member of the tech community there. Most people did not even know he was ill until he had passed away. Rest in peace Idd Salim.

Gradually the virtual perception of community has replaced actual community and social contact. We may seem to share common interests with people online but community is much more than common interests and objectives. It is about caring for each other. It is the reason why religious communities remain stronger than political or social arrangements. Meeting each other once a week in church, synagogue or mosque helped build a support system that social media has almost completely eroded.

Mark Zuckerberg is not just the lucky founder of a platform with over a Billion people; he is a true visionary. His original vision was to facilitate more connections and not to eliminate those we already have. While we may use his platform in ways he may not have intended, he realizes that meeting real people in person everyday is actually a healthy social habit.

His two goals for 2013 are very interesting. The first is to meet one real person outside Facebook everyday; that is at least 365 people in one year. An almost invisible fraction of Facebook’s user base but it is a great start. The numbers may seem small but the implications in terms of new learning for Zuckerberg are far reaching. The second goal is to teach at Middle school. Doing that alone made him more aware of the plight of migrant children and led to his recent activism on US immigration reform.

I visited Nigeria sometime last year and in an attempt to avoid Lagos traffic on 3rd Mainland Bridge while coming back from the airport, we ended up in a high population density area called Iwaya. I had worked very near Iwaya before but never really gone in there so I was not really prepared for what I encountered. “Social media” could not have revealed any of it to me.

I decided to meet the airtime dealers and agents as I always did and it seemed to me that all the presumptions we sometimes made and the way we look at agent and dealer hierarchy and structure was very different from the reality on the ground. It made me appreciate the work sales and distribution people do more and realize that technology was the easy part. These agents and dealers don’t care if you are using the best or worst platform; they just want things to work. If it doesn't work they will switch quickly because all they want to do is make money. In my opinion the power these street people have over consumer preference is grossly underestimated.

People ask me why I use an MTN prepaid phone in Nigeria but have all other lines for other operators on postpaid plans? I tell them that it I use it because it lets me buy prepaid airtime regularly via VTU and gives me a better understanding of the actual issues subscribers and dealers face. I can’t be a good service provider without knowing how well my service is performing. VTU also works on contract phones but a majority of the users are prepaid. Using the service myself also gives me a chance to interact with the prepaid dealerships and vendors. The first thing I do at the airport when I arrive is to goto the MTN dealer and top-up using VTU. If there is an issue I notify our support team and it keeps them on their toes. I do this at every country where we have active implementations for Mobile Money as well. If there is no agent at an airport it worries me.

In Ghana, last year I decided to stop driving on Sundays, for most of the year I only took local taxicabs to church and always did my best to have conversations with the drivers. It was from those conversations that I found out that the drivers found a way to use much cheaper LPG (liquefied petroleum gas) instead of gasoline to power their cars when fuel prices increased. Probably the reason why they Ghana did not have their own version of “Occupy Nigeria Riots” when fuel subsidies were removed. The prices of LPG powered generators actually tripled when there was a power crisis earlier this year.

There are actual opportunities waiting to be revealed in Africa just by moving around, observing and meeting people. I do not think a lot of investors actually understand the African streets and the entrepreneurs rarely know how to convey the message to them. Those entrepreneurs selling the same old “social impact” narrative and the non-commercial investors buying them may be in for a rude shock in the near future. It is hard to get out of air-conditioned offices and bulletproofed cars to listen to the actual music from the streets. I came from those streets and the music is very different from that being played in social media. Vanity metrics mean nothing.

I was fortunate to be asked by ccHub recently to mentor a team developing a location based point of interest search app. I saw that they did not put the option of airtime dealers or mobile money agents in their interface. I asked them why? They told me honestly that they had not actually seen any mobile money agents around them but the airtime agents are very easy to spot. Maybe it is time the regulators providing Nigeria’s new found “glowing” mobile money statistics actually visit the streets to see the reality for themselves. I sometimes wonder why banks and mobile money operators invest so much time and effort in getting social media feedback when the real battle is on the streets. 68% of Fortune 500 CEOs don’t use Social Media and I think I am beginning to see their logic.

Agent statistics provided by Gates Foundation in their portal“www.fspmaps.com” vary wildly from those being reported by the various operators. While it is probably easier to believe an independent survey instead of operator claims, we really don’t care about those numbers, we just want to actually see agents on the streets and use them. Agent locations should be published for people to see and be informed. I worked with an investor as part of the founding team of Econet Nigeria and the first thing we did even before we launched then was let people know where the actual Econet shops and agents were. This education was big boost for GSM adoption in Nigeria. Mobile Money Agents are not terrorist sleeper cells waiting to be activated, they are meant to be an integral part of a robust communications and product awareness strategy.

As entrepreneurs, we really need payments to work in Nigeria because a lot depends on it. I don’t care who does it best, I just want it done well. We want to hear the music from the streets and not the noise from social media.

To help with agent discovery and actual statistics, I have asked Emeka Okoye and the guys at ccHub to join in an OpenData project to map actual agent locations in Nigeria. They have accepted.We will be complementing and not replicating the excellent work already done by Gates Foundation and also give the operators a chance to showcase their “brick and mortar” (or umbrella) agents. Financial inclusion should be driven by actual connections and not imaginary ones.