For a while now, it had seemed to me that all the exciting tech community activity in Ghana was happening outside Accra. There seemed to be a lot going on in Kumasi (home of KNUST) and Cape Coast and I have seriously considered setting up something in Kumasi to tap into this pool of talent. When BarCamp Accra was announced, it was a big relief as it gave an opportunity to meet firsthand with those in my neck of the woods.

First problem I found was that a lot of people who should have been aware were not. My brother-in-law is a big time techie in government and ideally should have been a sponsor of such an event but he was busy planning his own private party at home. I had to drag him kicking and screaming to the venue. He also had friends in the industry doing exciting things locally but they also were not aware of the event when I told them about it later at the party. It seems not many techies in Ghana have caught the Twitter bug.

I had never been to Methodist University before and it was a good thing I was dragging my wife and her brother along but it still took a while to find the venue. I got there late but it was a pleasant surprise to see people like Herman Chinery-Hesse talking at one of the breakout sessions. Herman used to be my wife’s boss and a local pioneer of indigenous tech activity. The venue however could have been better as it was far from what I had expected. It made me realize the gap between tertiary education in Sub-Saharan Africa and other parts of the world. My old secondary school had better chairs and classrooms. 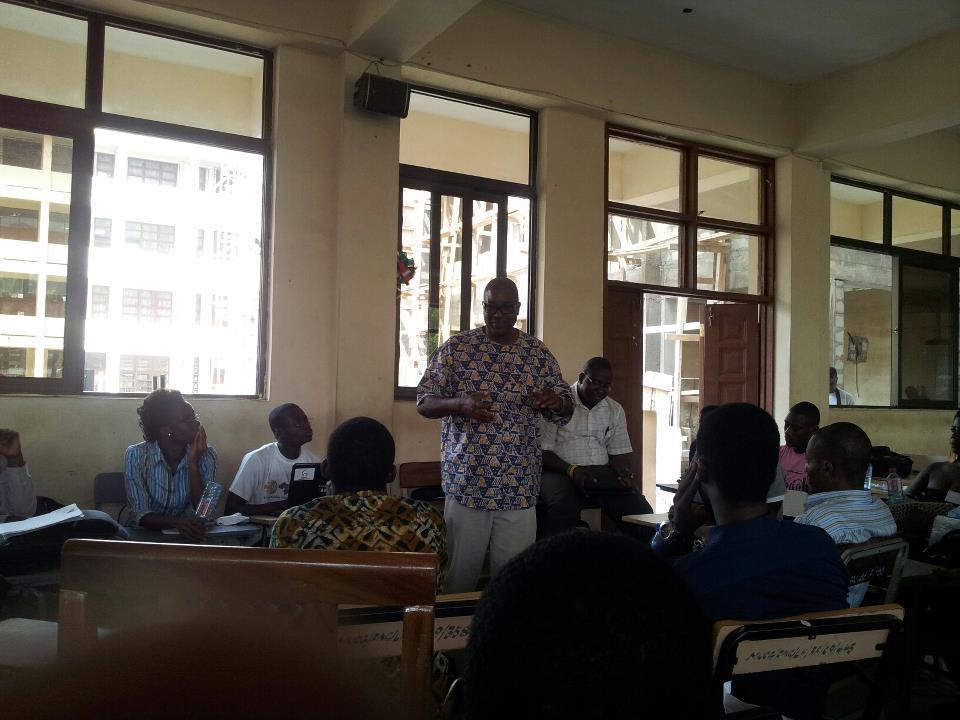 I quickly joined Herman’s breakout group (which was naturally the largest) and was impressed by the frank and open questions being asked by the guys around. It may also have had a lot to do with Herman’s own distinct style of not pulling punches but this was a different set of people from the shy cohort I have had to work with at some times in Ghana. Some of the local techies in the past had me almost pulling my hair out in frustration as they made (mostly wrong) assumptions on a lot of issues and never asked questions. These guys here were eager to learn and Herman was eager to share his own experience and knowledge.

One of the biggest problems we have with learning and knowledge sharing in Africa is our pedagogical models reinforced by a culture that encourages it. We see the older people as wiser ones who should never be questioned even when we have our doubts. Asking questions or arguing with elders was always frowned upon, as it was a sign of disrespect or poor upbringing. It also has led us into deep holes of ignorance as it never allowed us to learn properly. The boundaries of knowledge are increased when we question assumptions and in Africa, most assumptions are never questioned so they subsequently become a fabric of the culture.

The older generation learned from those before them and they pass on these practices along without question and the rate of change is slow. I found the Ghanaian society to be less turbulent because of this conservatism but in the age of the Internet, conservatism has no place. If you don’t question assumptions, you will not innovate. It was therefore  huge relief when I found people asking questions instead of just sitting down and taking in Herman’s sermon. Some of the questions were silly but were valid questions by people who were not ashamed to show that they did not know and wanted to learn and it was a good thing. In Nigeria, I found that in similar scenarios, a lot of people asking those questions would do it in a manner where they try to show off more of what they think they know than to readily admit what they do not know. Ego is a huge problem in African tech.

The two extremes, conservatism and egotism have to give way for true learning and innovation to happen. I remember my first day at a Harvard Executive Education Program, Professor Tom De-Long told us that to get the most from the course, we had to leave all our previous assumptions about management at the door before we walked in and open our minds to learn. We came out of that course knowing more about what we do not know than any reinforcement of what we thought we knew. Innovation in tech should also follow the same path; both mentors and entrepreneurs should never assume to know it all or assume any other person has all the answers. The thoroughfare to innovation is an inquisitive mind.

BarCamp Accra gave me hope again for the next generation of African techies. Leaning comes from asking a lot of questions and they were asking plenty. I am also happy that people like Herman are involved in the community; his frank and opinionated views are required to get people thinking and not following. A guy asked him there openly if he could come to his office to just sit and learn and he responded asking what the guy had to offer in return? We are building business communities here, as technology is a business and not a charity. That message also needs to be drummed into the Ghanaian tech community where a lot of so-called “social entrepreneurs” are springing up fed by NGO Kool Aid.

Thanks to Ato Ulzen-Appiah(@abocco) and his crew for the effort but a better venue (with Internet) will be preferred next time and we will provide our own contribution when asked to make that happen. There is a revolution happening in Ghana and the world will soon feel it, not just hear about it.