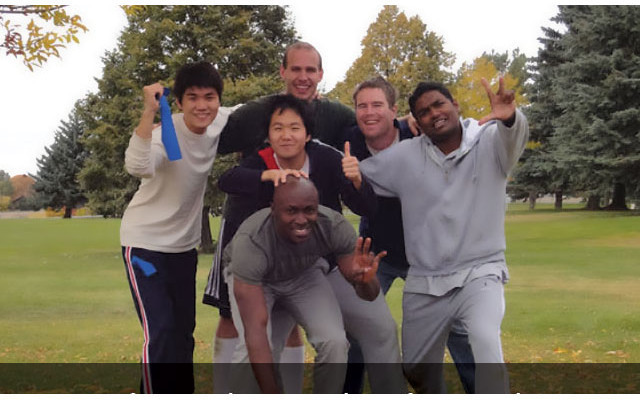 I was at the immigration queue at JFK yesterday which was especially long as it was an Emirates flight. Each person had to be given "special treatment" by the TSA. The time we spent on the queue allowed me to learn a lot more about the people around me from the conversations they were having.

Four young South Africans in front of me were having a rather animated discussion about a lot of things ranging from encryption to sub-atomic particles. I saw a couple of Google Nexus 7 tablets with them as they were talking about Google's encryption protocols and also Bosons, Leptons, Fermions and Quarks. I probably got more education just from eavesdropping in that conversation than I have had from years following and seeing chatter from my mostly Sub-Saharan African friends in social media.

It happened that they were from the University of Cape Town and were on a exchange/internship program named "Cultural Vistas". I took out my iPad there on the queue and Googled it then became part of their conversation too. This is a program I think a lot of young people in Sub-Saharan Africa should be part of and I think even working in other parts of Africa will be a great idea as well. This brings me to the second queue in Dubai where we were waiting for a taxi at Dubai Mall after the movie theatre had closed. There were some young Nigerians in front of me and their conversation was mostly about fashion, Nollywood and music....  It may have been wrong timing and it may also be unfair generalization but overhearing the conversations from two different sets of young people on both queues got me thinking if our real problems in Sub-Saharan Africa are not the same that is plaguing Black America? Chris Rock said Shaquille O'Neal is "rich" but the guy who pays his salary weekly is "wealthy". At the rate we are going, the South Africans will keep paying us our salaries, they already pay mine. The young South Africans were on the Cultural Vistas program to seek more knowledge and experience while the Nigerians were in Dubai to shop for clothes for the new academic session.

While we were undergrads and shortly before our graduation in 1988, my late friend Obi Osakwe whom we fondly knew as “Obi Live” made a prophetic statement. He said that if we keep drinking beer and chasing after young women, we would be helping to increase the gap between the developed and developing world. He further explained that an 18 year old American or European probably had visited several countries and knew how to fly a plane but all we knew then was how to drink a lot of beer and get under the skirts of the ladies very quickly. He was a very handsome and outgoing fellow so he knew very much what he was talking about. He challenged us to do something different and it made me think of a career in technology rather than banking or accounting, which were the fad professions at that time.

The knowledge gap is increasing and sadly "Obi Live" did not live long enough to see his prophecy come true. He died in a road accident shortly after graduiation. We lost a visionary and a potentially great leader. When I speak at the Paradigm Initiative Nigeria's TENT gathering at Ife next month, I will be reminding everyone of Obi’s warning. I see hope in the new generation but they just have to be exposed to other things beyond fads.

My friend Andrew Turpin a South African living in Pretoria and one of the founders of House4Hack.co.za (together with his father Andrew Turpin Snr) built an airplane from scratch and flies it. Details here. I am still battling with flight simulators and I’m here in the USA on Black Friday to look for bargains on equipment.

Obi Live was right, we should have left the beer and girls alone.