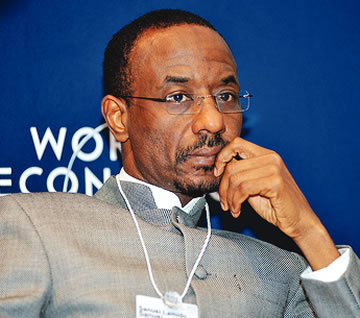 I am sure there are very some very serious people at the Central Bank of Nigeria (CBN) and Sanusi Lamido Sanusi the Governor of the apex bank is on top of that list. He did a lot of things people did not like in his first year in office but he gave us a stronger financial sector and we are grateful for that. A lot of what his administration corrected was however due to flawed policies of previous ones.

The CBN also finally kick-started efforts towards greater financial inclusion by issuing mobile licenses and we were very hopeful. One year later however, there is more uncertainty than hope as none of the Mobile Money license holders have been able to reach any meaningful scale. The total number of Mobile Money users so far is less than the population of one suburb in Lagos. If Ernest Ndukwe (the former Executive Vice Chairman of the Nigerian Communications Commission) had been put in charge of the Mobile Money initiative the same way he presided over the GSM licensing process, we would have had all licenses revoked by now for dismal performance.

Nobody said it was ever going to be easy and nobody expected it to be but nobody also expected things to get so messed up that we will have over 20 players and not a single one with a clear plan or the clout to move things forward rapidly. It is now very obvious from the way the initiative has gone that a lot of the players are seemingly totally out of their depth in terms of financial clout and expertise and the regulator probably made a the wrong call with the framework.

The Mobile Payments framework document (on which the initiative is based) is sometimes ambiguous and vague in certain areas and was more like a school term paper with general guidelines than a visionary policy document. It is not determinate on expected outcomes and also not based on the realities of micro payments in the emerging markets. It seemed like a document crafted by bureaucrats to protect the interests of a few institutions at the expense of the greater purpose of the public it was meant to serve.

The Central Bank of Nigeria is pursuing a Cash-Less or (Cash-Light initiative) as they have termed it. The idea is to make the financial sector more efficient as cash management has become a burden to the system.

The fundamental flaws in the process by the CBN can be explained by the famous entrepreneur and venture capitalist Peter Thiel’s  “Determinate, Indeterminate, Pessimistic, Optimistic” framework described in his Stanford University CS 183 course. Details of the lecture can be found here and the diagrams below summarizes the framework 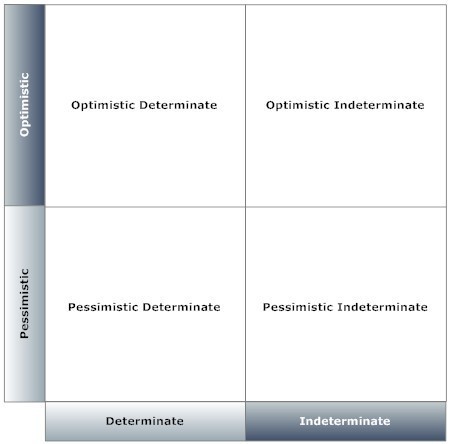 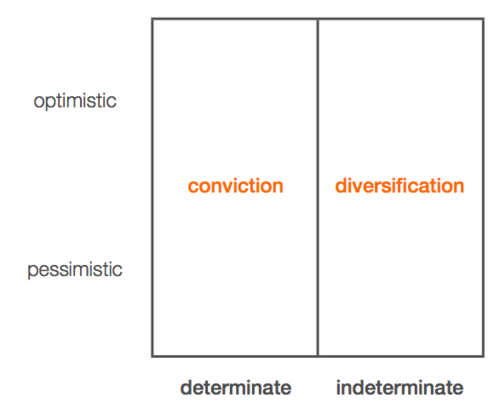 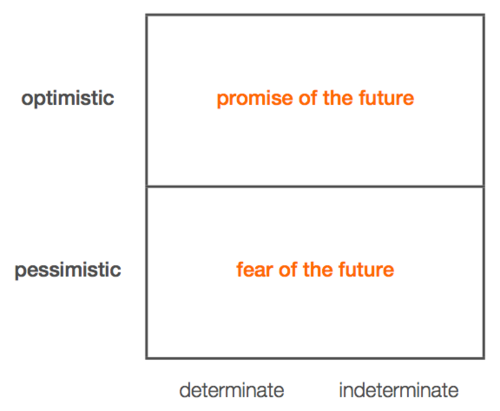 Using the framework and looking at the rapid growth of the telecommunications industry in Nigeria, the previous NCC’s options in licensing GSM companies could be explained as such:

Nigeria needs solid telecommunications infrastructure to spur economic growth. The potential for success is high when done right and it will help a lot of people out of poverty. There is a clear plan for success in telecoms initiatives and only serious players with clout are allowed to play. We decide to bet on GSM technology, make the barriers to entry high to allow only serious players in but keep them strictly regulated.

Nigerians don’t really need phones and it would be a waste of time to craft a robust policy or invite bidders. “Phones are for the rich and not for the masses” - according to a former telecommunications minister. We should focus on building the public telephone monopoly NITEL and put enough payphones in public places for those who must use them but can’t afford them

Nigeria needs telecommunications infrastructure but we don’t know how much it will cost to put it in place and what is best or will work. We do a whole portfolio of things, we try everything until we find what works best.  We allow all players in and give everyone a chance. Anyone who survives wins the race.

We don’t know what the best way to provide telecommunications infrastructure and the investment required to provide basic infrastructure is more than what we can afford at this stage. Any serious players we may bring in will make the services costly as they will provide their own infrastructure and would want to recoup investments, the masses may not be able to afford it if we allow the big players to come in. Take a portfolio approach with many small players and let each one provide infrastructure for their own niche. Build regional or local networks all connected to the National Carrier Nitel.

The NCC decided to do two things, for GSM they took the “Optimistic, Determinate” option by licensing a limited number of players after inviting all prequalified players to bid for licenses.  For CDMA they took an “indeterminate, optimistic” approach allowing smaller niche players to build local or regional telecommunications entities. While people may argue that the technologies may have made the difference in the huge disparity in growth, the GSM companies fared much better than the CDMA companies as the players were more serious and committed.

Universal licenses were later introduced with the players not limited to technology and we are better off for it with subscriber growth now over 100 million from only 500,000 in 10 years. The financial sector has not seen the same growth because the Central Bank took a different approach. 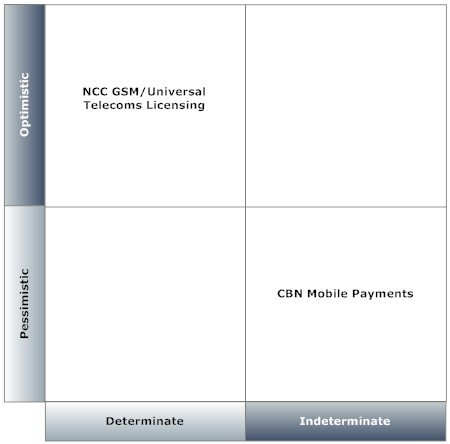 The problems with the financial sector started way back before Sanusi’s era when the foreign owned banks were nationalized and the financial sector left in the hands of local investors. One of the central bank regimes earlier took a portfolio approach with massive deregulation of the financial sector allowing players with a small capital base to enter the sector. A lot of licenses were issued for banks and non-bank financial institutions including boutique finance houses and primary mortgage institutions.

That approach led to several failures and almost total collapse of the financial sector with several costly corrective measures taken afterwards to consolidate the portfolio of institutions into more solid players. A lot of people lost their life savings (many I know personally) and it led to a crisis of confidence by consumers with the result that cash became the predominant transaction mechanism.

After several failures and almost systemic collapse they have adopted a more “Optimistic, Determinate” approach by consolidation, raising the barriers to entry with increasing capital requirements, liquidity ratio and stricter regulation. They also allowed the foreign banks back in as well. All the damage and backwardness in the financial sector could have been avoided if they did not embark on the costly experiment earlier.

Nigeria needs a solid and sustainable mobile payments infrastructure to spur financial inclusion and economic growth. There is a clear plan for success and only serious players with clout and can scale rapidly are licensed. Allow prequalified players to bid for licenses, the barriers to entry are high and the industry is well regulated.

Nigerians don’t really need a separate mobile payments framework, and it would be a waste of time to craft a separate policy. We should focus on bank consolidation and growth. The banks and companies like Interswitch, Etranzact  or NIBSS will drive payments.

Nigeria needs a mobile payments infrastructure to spur financial inclusion and economic growth but we don’t know what is best approach is and what may work. We invite all players and do a whole portfolio of things. We also don’t enforce strict regulation to allow the free market determine the best option or players.

We need to reduce the cash burden on banks and The Mint. Mobile payments is one of the options we have to tackle this but we don’t know the best way forward with it yet. We will take a portfolio approach and see if it will work but we will exclude the big players with existing infrastructure, as we don’t want monopoly or unfair advantage to the banks we regulate. We also can’t really regulate this sector properly with the telcos involved as it would mean reaching into NCC’s turf so we stick to our comfort zone with bank and non-bank players. Telecommunications companies will remain only as infrastructure providers and they must ensure that they work with the other players who will take the lead.

If historical antecedents in the financial sector have a predictive value of future prospects then we all know what will happen if we choose either an “Optimistic, Determinate” or “Pessimistic, Indeterminate” approach to mobile payments.

The same deregulation, portfolio approach, indeterminacy and pessimism that characterized banking in the early days is being replicated in mobile payments and it should come as no surprise that there is slow growth.  Excluding telecommunications companies from being primary license holders out of paranoia shows a tendency towards pessimism and the portfolio approach in issuing over 20 approvals indicates indeterminacy.

The Nigerian Cash Problem And Paranoia By The Banking Sector

Money is a store of value while bank accounts, mobile wallets and other storage locations are repositories of value. Successful payment initiatives are simply those that allow value to flow between repositories with relative ease and convenience. If cards and cash are more convenient than barter then so be it. If other mechanisms come that make these flows more efficient and convenient, the market will adopt them.

Because we want a Cashless Policy to succeed, we basically cannot force a market into a default mode because theoretically it seems more efficient when all the evidence is to the contrary. You also cannot force people to use sub-optimal solutions on consumers when the banks and other financial sector operators are not ready or totally out of their depth. Efficiencies have to be discovered by the market itself. Mobile payments and other forms of electronic payments thrive when markets discover those efficiencies. What successful payment companies do is accelerate this speed of discovery after providing the infrastructure at scale. The scale problem is what plagues a place like Nigeria and current efforts to try to force market adoption from players not structured to cope with scale will fail

The first product telcos enable their mobile money for is always airtime purchases and doing this at scale takes out a lot of cash based transactions and makes them electronic. They do this not just because they want to reduce churn but because it also saves them a lot of distribution costs and the customer also benefits from it. The telcos can also roll out an agent network for Mobile Money faster than any player because they already have nationwide distribution networks in place. If we are serious about going cash-less this is a win-win-win scenario.

When a robust mobile payments framework is in place it seems the only losers will be the banks as they would be deprived of commission on turnover (COT) when telco airtime distribution becomes more efficient. Loss of COT is probably the only reason why the banks are scared and are fighting this. Dependence on COT is probably the main reason why banking has not evolved properly in Nigeria

One year is enough time to look seriously at the current Mobile Payments Framework and do a review. The role of the regulator is to act in the best interest of the consumers not in the interest of the banks or bankers. 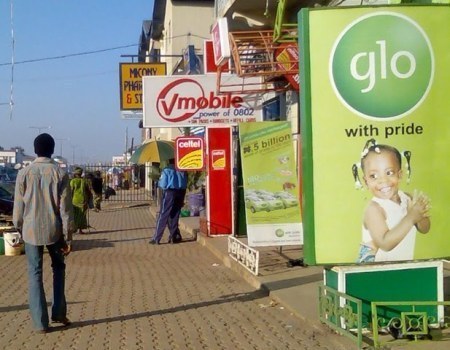 Full disclosure:  Companies I am involved with do a lot of technical consulting work for telcos and I have been part of the startup team of a major telco while working for an investor in Nigeria.  The opinions in this blog post are mine as an observer and customer/subscriber they are not of my company,  partners or clients.